Recently we found out that our dog, Chancellor, is part Rhodeisan Ridgeback Lion Hound. I had never heard of that dog breed before so when we found that out I did a quick Google search on the dog breed and after reading a couple of articles, a whole lot of stuff about him started to make sense.

Chance is a snuggler. That might actually be an understatement. Chance LOVES to cuddle. Like that's his biggest personality trait. Chance desperatly wants to be as close to me as physically possible at all times. It's hard to describe to you how much he loves to cuddle, so I grabbed a few pictures from yesterday and today to illustrate to you his aggressive desire to snuggle: 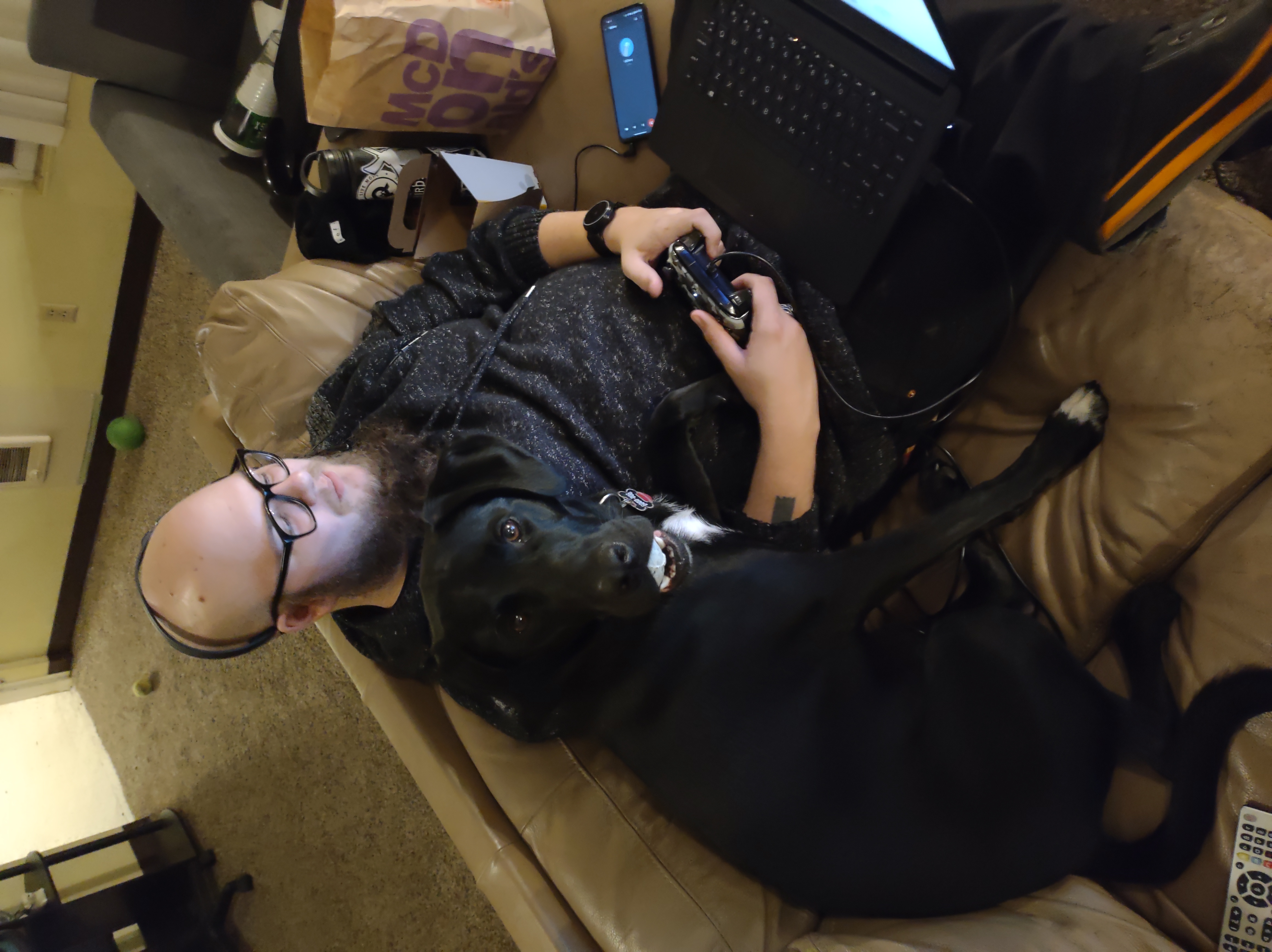 This picture was taken yesterday while I was attempting to play an online video game. Chance wanted to be included so he got literally as close to me as he could and flopped his body on mine. He stayed like this for about an hour. Sure though, that's one example. Perhaps you aren't convinced that this is as widespread a problem in our household as I'm making it out to be. Let me direct your attention to another photo: 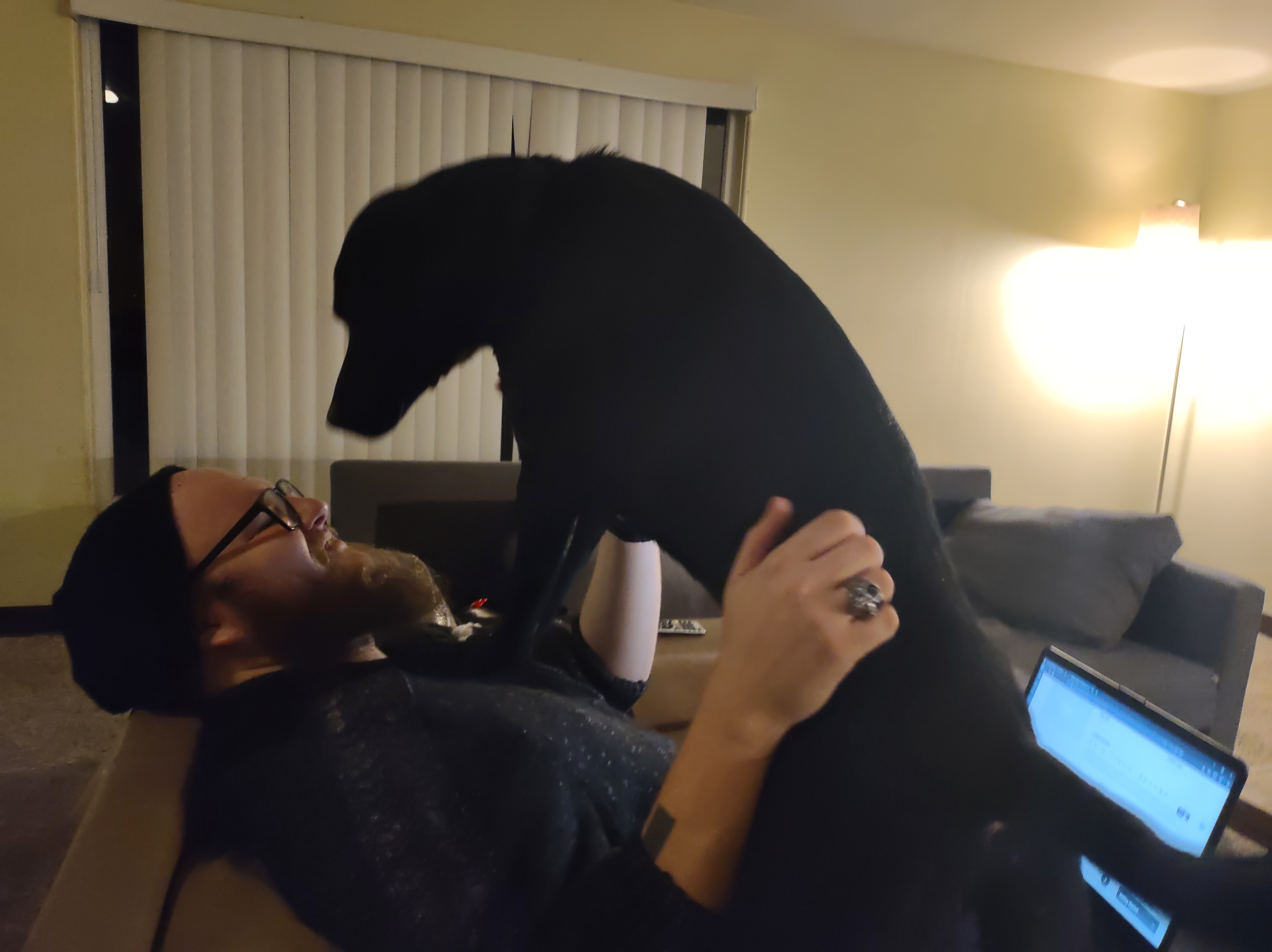 This was taken WHILE I WAS WRITTING THIS POST. I literally could not get 5 uninterrupted minutes without Chancellor climbing on me like a jungle gym. Chance's behavior always seemed strange for a dog, until I learned that Rhodesian Ridgeback Lion Hounds were breed to be extremely close with their masters both emotionally and physically. These hounds were often trained to hunt lions, thus their name. Because of this they formed strong bonds with their masters, wanting to be as close to them as possbile because with their master they were safe. Over time, this behavoir translated to a love of snuggling that has remained a staple of the breed.

I probably shouldn't be complaining about my dogs deep affection for me. But sometimes his love is overwhelming. It can be annoying when I'm trying to do something productive and my silly 60 pound dog throws himself on top of me because he is over-joyed with my presence. But then I stop and think about how sweet it really is. My dog loves me so much that sitting next to me for a hour while I play my game, and largely ignore him, is the best moment of his day. He can't contain himself because his only desire is to dwell in my presence. How could I possibly be mad or annoyed at a creature that loves me this much?

Chance's desire to spend time with me reminds me of something the psalmist David wrote:

"One thing I ask from the Lord,
this only do I seek:
that I may dwell in the house of the Lord
all the days of my life,
to gaze on the beauty of the Lord
and to seek him in his temple.
For in the day of trouble
he will keep me safe in his dwelling;
he will hide me in the shelter of his sacred tent
and set me high upon a rock". Psalms 27:4-5

I don't know about you, but I have always found this verse as something to aspire too. Yet, at the same time, I have quite a bit of trouble with it. How could I only want one thing out of my relationship with God? I've been conditioned my whole life to want everything my heart desires at a moments notice. If you ask me on any random day what I want out of my spiritual walk, I'd seriously doubt I'd say to dwell with God. More likely, I'd say I want to feel closer to Him, or I want the anwser to my prayers, solutions to my problems, and an unending flow of cash.

But could I honestly say I want to dwell with God? To just be in His presnece? Just to look at Him and study His beauty? I want to want that, but my flesh is weak. Could I imagine just sitting with God for the rest of eternity? Perhaps I need to learn a lesson from my dog. Perhaps I need to learn to be content with the presence of my master, even if everything is falling apart.

The best part too? God isn't a finicky master like I am. He isn't annoyed by my need to flop on Him in the middle of His work. In fact, Scripture seems to indicate that He delights in that. So why am I so hesitant to do just that?

In the fourth century there lived a monk by the name of Brother Lawrence. His story is something incredible because of how unremarkable of a life he lived. He was a monk of the lowest order, and he delighted in his daily chores of dish washing and shoe making. Why? Because he claimed to be constantly in the presence of God. Brother Lawrence's fellow monks couldn't understand how he could be so happy all the time. After his death, a series of letters he wrote were compiled by a friend of his, and they reveal a very simple man completely inraptured by the presence of God. Brother Lawrence once said; "Let us occupy ourselves entirely in knowing God. The more we know Him, the more we will desire to know Him. As love increases with knowledge, the more we know God, the more we will truly love Him."

Maybe Brother Lawrence was able to experience God's presence constantly because his priorites were right. Above anything else he desired to dwell with God and because of that everything else in his life played second fiddle. Maybe it's a lesson Chancellor knows too, that in order to really know someone you have to be present with them every moment you get. We get so many moments in this life, and we often dwell on silly fleeting things. But, if we can learn to dwell with God, nothing we do will seem silly or fleeting.

Register for this event

Your registration has been received.

Your email has been sent.

We have just sent an email containing a new password to login. You can always change this password by logging in and visiting the settings page.

Your request for an account has been received. Once this information is moderated you will receive an email with your account details.

We are excited you've joined the ChurchSpring family! It is our desire to come along side your ministry as you seek to reach the world for Christ. We would like to take you through a quick tutorial to get you on your way. Click continue to get started.

You have reached the limit of 6 main level navigation items. You can always rename or delete your existing main nav items to better organize your content. Consider adding pages to the sub navigation menus as well.

Are you sure you want to delete this item?

We are processing your request. Please do not click anything until this process is completed.
Thank you.