Take a deep breathe, hold it for a minute, now let it out.

The world is not ending, even though it feels like it. We've been through a heck of a year and we are getting close to what feels like the season finale. But just breathe for a minute, and allow me to remind us of a few things that we as Christians should keep in mind come November 3rd.

Personally, I've had a dangerous thought that keeps trying to pop into my mind over the last few weeks as we get closer and closer to the strangest election in American history. The thought is that I just have to make it past November 3rd because then the divisiveness in our nation will be done. It's a thought I've tried to take comfort in because I just want everything we are going through to be done. But we have to remind ourselves that November 3rd really doesn't mark the end of anything, even the election.

In America we've gotten pretty good at needing to have everything right when we want it. It's the Domino's promise of 30 minutes or less, it's door dash coming to my town so I don't have to get up to get my Taco Bell, it's the privilege this country has afforded me to have any desire gratified instantly. And our elections haven't been immune to that. We have to brace ourselves for the reality that this election won't be over at midnight on November 3rd like it has been traditionally for the last however many elections we've had. We are going to want to know the answer that night, but with how strange everything is this year most political analysts don't believe we will have a clear answer until weeks or months after November 3rd.

That means that we have a special responsibility as Christian's not to follow hearsay or false announcements of victory or defeat. And let me tell you, social media is going to be full of it the night of November 3rd. Christian's like to claim we are people of the truth, so a good way for us to show it this year is to not jump on bandwagons based on anything but fact. Perhaps we need to take to heart Paul's recommendations to Timothy: "Have nothing to do with godless myths and old wives' tales, rather, train yourself to be godly. For physical training is of some value, but godliness has value for all things, holding promise for both the present life and the life to come." 1st Timothy 4:7-8.

It's pretty impossible to have godliness while arguing on Facebook. Trust me, I've tried, and it can't be done. There is also nothing godly about leading others astray, so we've been given a pretty big responsibility that is going to require patience on our parts. Maybe that's what we should all be asking God for over these next 6 days.

"But what about Israel!?!" I hear you say. Sure, let's talk about Israel. There seems to be this strange belief in Christian circles that if we would just act like the nation of Israel in the TaNaKh then everything would be perfect and God would bless us. News flash though, you do not want God to treat America like He treats Israel. There are very very very few good stories about Israels behavior in Scripture and most of the time God is punishing them. 2020 looks bad now, but trust me when I say you do not want the book of Exodus to play out with God and America.

At the same time we need to understand that God's relationship with Israel in the TaNaKh is part of an old covenant. An old promise that Jesus fulfills. As a result, there is no one special people group that God is looking after, because through Jesus, God has come for every tongue, tribe, and nation. The idea that God is going to bless America in some special way beyond other countries is called "American Exceptionalism", and it isn't Biblical in the slightest.

I know, I love my country too. We've got it pretty good here. But God's love isn't any stronger for Americans than it is for Russians, Iraqis, Palestinians, Canadians, or Mexicans. Whatever happens on November 3rd and beyond we need to remember that it is not anymore within or without the will of God as any other countries elections. We aren't that special ya'll.

Instead, what this election does provide for us as Christians is a chance to remember that we are a part of a global community that stretches far beyond America's borders. America is just like every other nation that has come before it, and one day it will not be here. But we know how the story ends for our community; "After this I looked, and there before me was a great multitude that no one could count, from every nation, tribe, people and language, standing before the throne and before the Lamb. They were wearing white robes and were holding palm branches in their hands. And they cried out in a loud voice: 'Salvation belongs to our God, who sits on the throne, and to the Lamb.'" (Revelation 7:9-10)

So, in the next 6 days as the world watches the circus of America play out, remember that our hope does not rest on any one nation, especially not America. And thank God for that.

Nobody likes to talk about accountability unless your at an AA meeting, and even then it's not the favorite subject. Accountability is work, and it's a lot easier just to let someone do what they are going to do than to raise your voice and stop it. Especially when that person is the president of the United States.

Whoever wins the election needs to be held accountable for their time in office. That means that when we see injustice happening to our neighbors we don't sit and watch, we stand up and say something. Even if the president is part of your own political party. This is good news, because traditionally for better or for worse, Christian's have loved being virtue signalers. But we have to speak up about the right things. Dr. Martin Luther King Jr. called the church "the conscience of the state". If we can't be that, then we really can't be effective at all in this country.

The problem is America is a pretty messed up place. There are tons of issues that can take up our time, so the temptation is to just pick who you believe to be the lesser of two evils and be done with it. But that's not a Christ-like way to engage in politics. You may feel like you have to settle and vote for someone you don't find appealing, but that's not where your responsibility ends as a Christian. After you vote, it is so important that you hold your candidate responsible for the things Jesus cares about. Jesus constantly spoke out against those in power who crushed the weak and the marginalized, and this is where our politics should begin as Christians. To help us understand it better, the Free Methodist Church has given us a handy info graphic to show what causes and issues we should help hold our president accountable too. 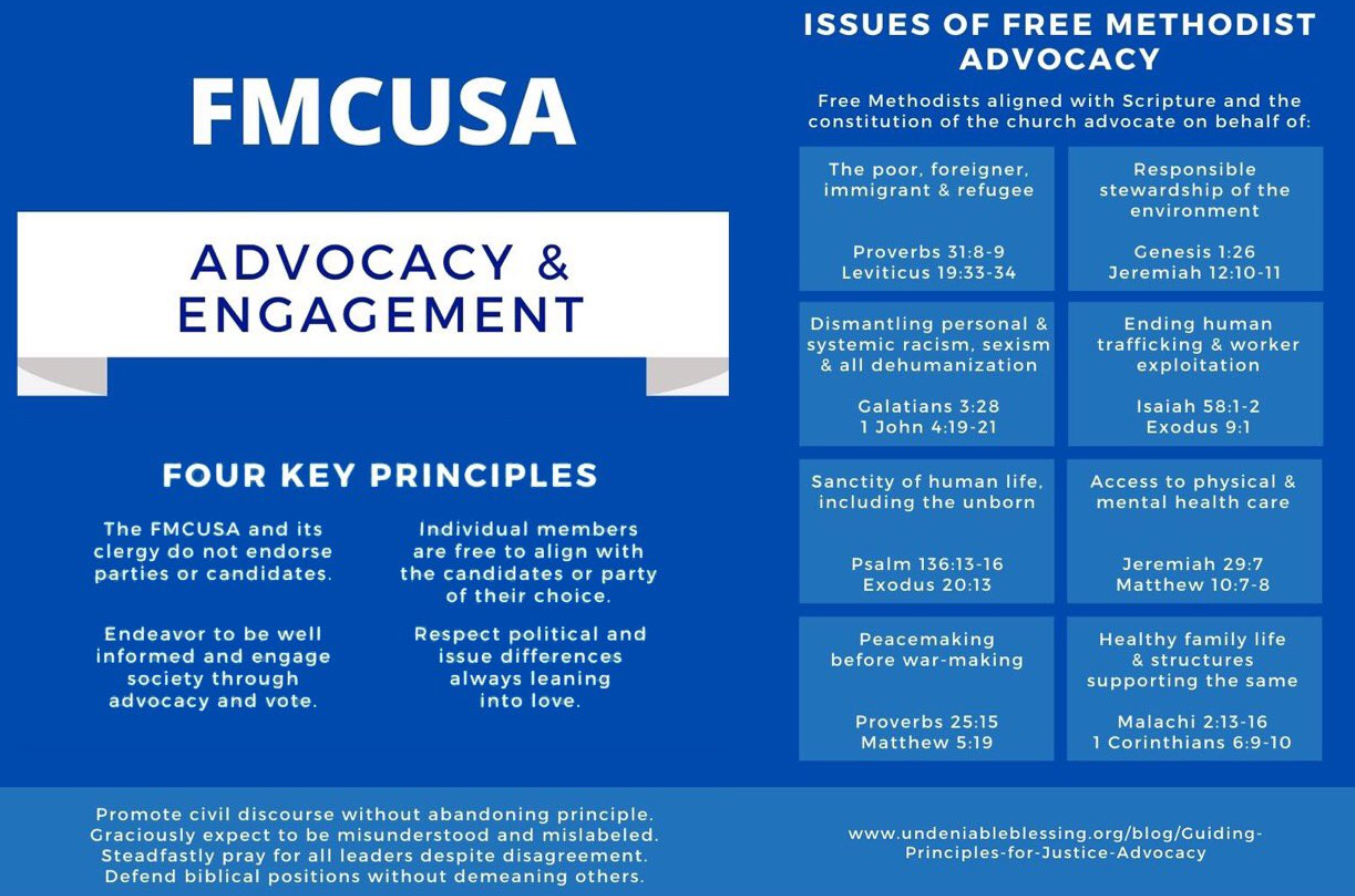 During the next 6 days and beyond, remember to hold your electors accountable. There may not be any more American thing you can do, because remember they are supposed to be public servants. And don't get too bent out of shape when the church criticizes your candidate, because we should be.

Now I get it. We are American citizens too. But dual citizenship never plays out as a 50/50 split, and sooner or later one citizenship is going to class with another. We have to remember that when our allegiances clash, we are to be loyal to Christ.

Saying the phrase "Jesus is Lord" is a small act of resistance. It is refusing to acknowledge that whoever sits on America's throne doesn't rule our hearts. So maybe we need to say it more often. Write it on a sticky note. Hang it on your fridge. Cast it to your TV on election night instead of the results. There may be nothing more powerful in a Christian's arsenal than this phrase over the next six days.

I can't tell you what the future holds. But I can tell you that the church will be alright and that after November 3rd and beyond Christ will still sit on the throne regardless of whether America is here or not. In the meantime, let us set our minds and hands to the work of Christ, to bring about the Kingdom here on earth as it is in Heaven. Come quickly Lord Jesus!

Register for this event

Your registration has been received.

Your email has been sent.

We have just sent an email containing a new password to login. You can always change this password by logging in and visiting the settings page.

Your request for an account has been received. Once this information is moderated you will receive an email with your account details.

We are excited you've joined the ChurchSpring family! It is our desire to come along side your ministry as you seek to reach the world for Christ. We would like to take you through a quick tutorial to get you on your way. Click continue to get started.

You have reached the limit of 6 main level navigation items. You can always rename or delete your existing main nav items to better organize your content. Consider adding pages to the sub navigation menus as well.

Are you sure you want to delete this item?

We are processing your request. Please do not click anything until this process is completed.
Thank you.